It could have been witnessing your first Hex hatch covering the Great Lakes like an armada of small boats, a brown trout rising to the Spring’s first Sulphur mayfly on an Appalachian creek, or late summer Green Drakes bringing the river to a boil as every fish in the river seemed to be rising right in front of you. For many of us, witnessing the ballet of mayflies dancing over the water and trout rising to our fly have been the seeds to some of our most cherished memories on the water as well as the opening lines to our favorite fishing stories. Found in both moving and still waters, the 611 species of mayfly found across North America are one of the four main aquatic food groups of trout. The fly fisher’s ability to identify mayflies throughout their life cycle (Nymph, Dun, and Spinner) and match the natural insect to the best fly pattern in their box will make the difference between frustrated days on the water and those full of tight lines. With a basic understanding of the physical traits that define mayflies through their life cycle, you will be able to quickly match the hatch, anticipate where the trout will be feeding next, and add some new memories of epic days on the water. 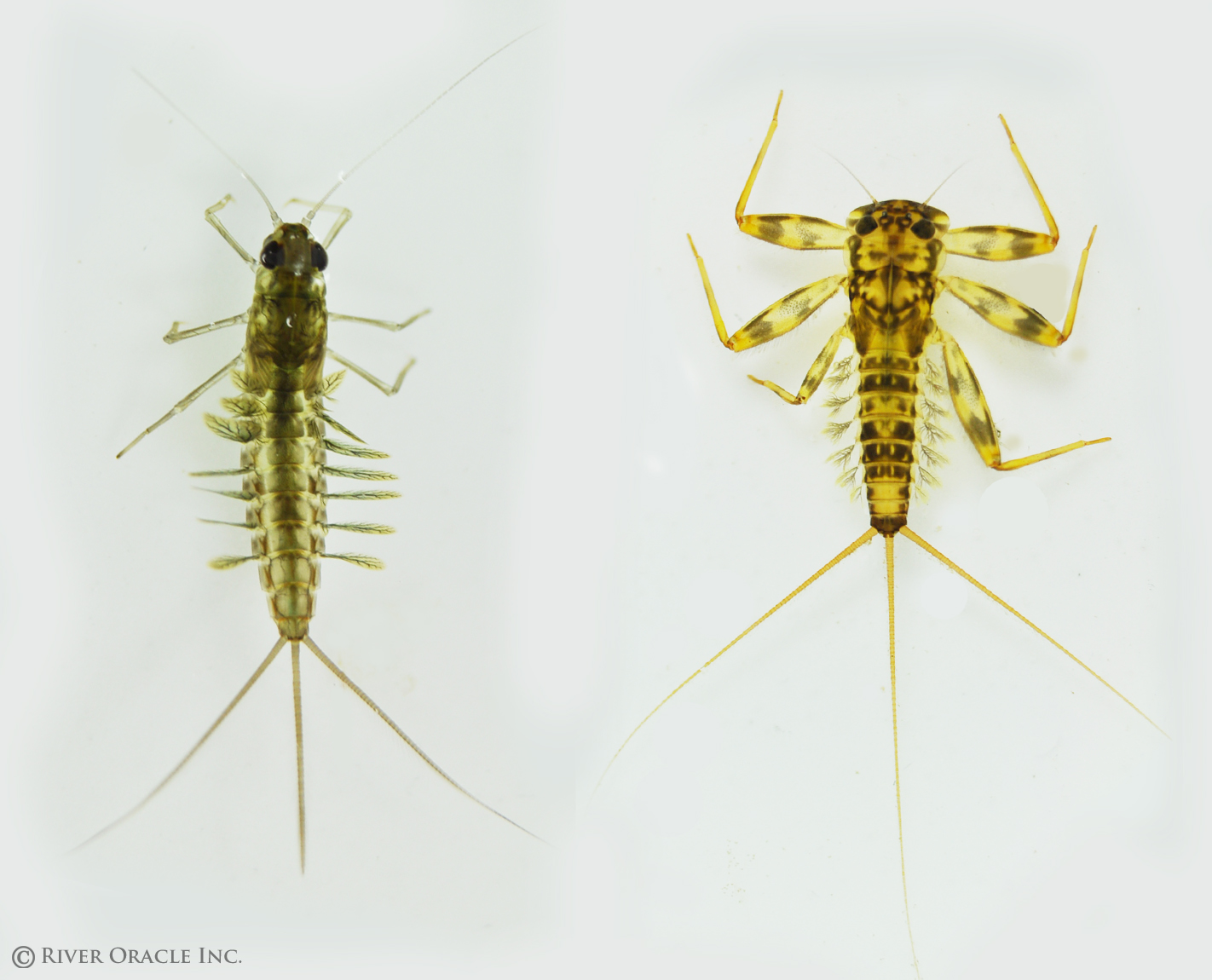 Hatching from the egg a matter of days to weeks after being laid, the mayfly nymph will spend six to twelve months on the bottom of the stream or lake bed. The compact, aerodynamic mayfly nymph has been engineered by mother nature to thrive in the deep, fast flowing world of trout and will be found in one of two forms: 1) Torpedo shaped – allowing it to swim through the water, or 2) Flattened – enabling the nymph to grasp low to the riverbed as the current swirls overhead. The pair of short bristle-like antenna crowning the head of the mayfly nymph are much smaller than those seen on stoneflies, while each of the closely clustered legs of the mayfly have only one hook per foot compared with those of the stonefly which have two hooks per foot. Along the sides of the abdomen – located between the legs and tail – are a series of feather-like gills that flutter and pulse, allowing the mayfly nymph to breathe. The most recognizable trait for quick identification is the mayfly nymph’s three long, thin tails (true among 95% of mayfly species). 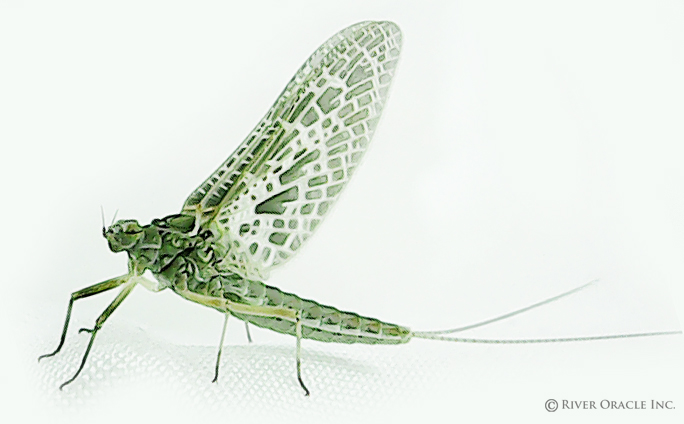 Prompted by rising water temperatures, the mature mayfly nymph will leave the refuge of the bottom of the stream or lake, and will swim towards the surface of the water. Upon breaking through the surface of the water, the skin along the back of the mayfly nymph splits open and the wings of the Dun Mayfly unfold into the air. Upon fully emerging from its old skin and drying its wings, the dun will leave the water and fly into the streamside vegetation. The adult dun shares several of the characteristics with the nymph including a pair of short bristle-like antennas, and a closely clustered group of legs each topped with one hook per foot. The eyes of the adult mayfly almost cover the front of its head, while its wings stand up from its back similar in shape to a sail standing tall above the deck of a boat. The wings of the Dun are typically smoky and clouded in appearance, its body is muted in color, and its 2-3 tails are of moderate length. 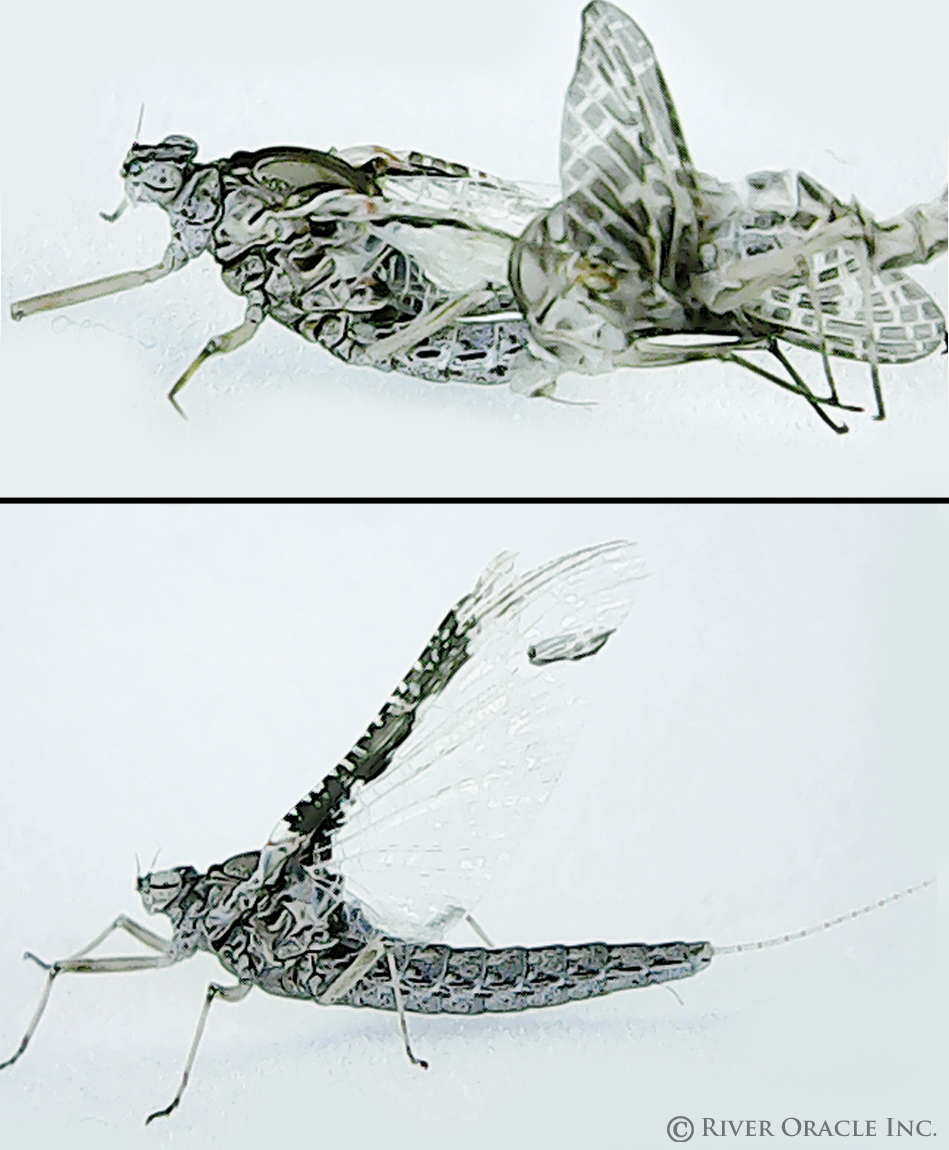 Within 2-24 hours after leaving the water, the dun mayfly will emerge a second time, nestled among the streamside vegetation, entering the Spinner phase of its life cycle. Shrugging off the drab skin of the dun, the spinner is similar to a bird putting on its vibrant mating plumage. The wings of the spinner are translucent and glass-like in appearance, while its body stands apart from the dun in vivid contrast and brilliant color. The tails of the spinner are often two to three times longer than those of the dun. After completing this second emergence, the mayfly spinners leave the streamside to dance and weave over the water where they will mate in flight. Immediately after mating, the male spinners flutter down to the surface of the water and die. The female mayfly spinners also return to the surface of the water where they deposit their eggs through the surface of the water before they too die. This final exertion and the death of the mayfly is often called the “Spinner Fall” while he individual mayflies with their wings laying flat on the water is known as the “Spent Spinner”. The entirety of the dun and spinner life cycles lasts between 4-48 hours. 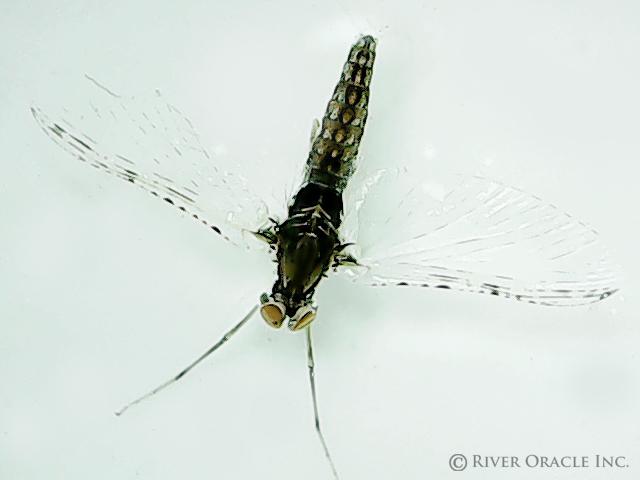 Like a clairvoyant with a view of the future, you can now observe the mayflies in and on the water and be able to anticipate what will happen next. When you see the dun mayflies lining the branch of a streamside willow you should be able to predict their imminent transition into the spinner and return to the river. This insider knowledge will enable you to not just match the current life cycle of the mayflies in the water, but to anticipate which flies will be productive in the next day or even the next hour. Join us issue as we take this knowledge of the mayfly into the fly box when we will discuss the key fly patterns for matching each of life cycle in Matching Mayflies: Part II.

Sign up for exclusive updates, new arrivals and insider-only discounts